I was sitting on an old tree stump just a bit above the path to Senica. I closed my eyes and opened my ears. The wind was moving through the leaves above and around me, creating a subtle noise. I sat completely still. Very soon the sound of beech tree became a gentle whispering. I tried to open my eyes to see the whisperer.

So I kept my eyes shut and my ears opened. I could barely hear it, but this is what the voice told me.

“I met a fox this morning. She was young, curious and playful. She was chuckling, because she gave fright to an old hedgehog. With her paw she made him trip and he curled up in a ball, poor frightened thing… Then the fox pushed him down the hill like a spiky ball. I could hear the hedgehog squeaky ranting and pleas to forest gods to save him and make him stop. Rolling down made the leaves stick to his spines and protected him from the dangerous obstacles. When he finally stopped, his head was spinning and he felt extremely nauseous. He wasn’t sure if he felt like this from the fearful encounter with the fox or from the long roll down. The hedgehog cleared his throat and looked around cautiously. He was alone, the fox was gone. She went her own way happy with the success of her prank. But there was something else nearby that the old hedgehog spotted. It was a little yellow chanterelle that smelled deliciously. He ate it with great gusto, comforting his empty tummy some. Immediately after he finished with the mushroom, a bit further a red carpet of strawberries caught the hedgehog’s  eye. What a fortunate find!.. When he ate his fill, there were still plenty. He found a hideout in a bush nearby and munched contentedly. “So it wasn’t such a bad morning after all. The fox rolled me directly to this delightful feast. Every wrong has its right,” the hedgehog said to himself and yawned.The morning sun touched the forest ground and found him snoring. His stomach was full, he was alive and quite tired.”

At this moment I opened my eyes. By this time I was sure that the voice belongs to a forest gnome, but if it was so, he was too fast for me. The leaves were rustling above and around me, but there was no sight of the little gnome and the whispering stopped. I got up with my behind sore, but I was happy. I turned to my home, richer for another story.

In August, we successfully applied for a Slovenian Tourist Board call for proposals for short guided tours (up to two hours). The purpose of the guided tours is to get to know and promote the Read more… 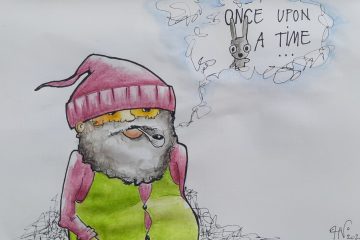 -Who.. Who are you?… -Marv the Dwarf is my name. Don’t be afraid, I’ll show you how to get back to the path, he answered with his tiny, barely audible voice and his trust inducing Read more…

So this is how it happened. One sunny afternoon, when I was about halfway through primary school, we set off to Senica, a hill directly behind my home village.  My father was the leader of Read more…